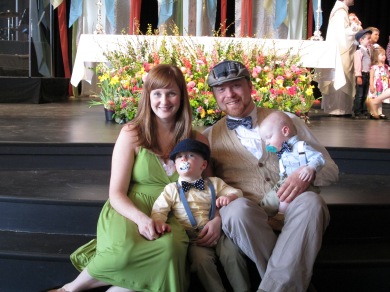 {All my boys were so dapper on Easter, don’t you think?}

We were outside all day yesterday. It was glorious.

Also, I changed the inner tube on our new double stroller (Christmas gift from Grandma & Grandpa Shuffle) by myself. I’m so proud.

I have been realizing lately that blogging mostly doesn’t fit into my life. What I want to write about is either a list of things I agree with that someone else has written about much more eloquently or too personal or complain-y and better put down in my journal and hopefully never read again. I’d like to post pictures of things that make me feel content in my life, but I never seem to find the time to take pictures!

[I’ve recently discovered that, lo and behold, I am perfectionist. Not in the “my house has to be immaculate for anyone to come over” way (although I know there are some of you who come to my house and comment on the lack of clutter…I know “clean” is subjective), but in a way that keeps me from doing things because I think I don’t have whatever I need to do it perfectly. Now that I see this, I realize it’s been a problem for me all along but in this season of life it’s particularly crippling in terms of doing things that feed my soul. I don’t have much of a strategy for dealing with it yet, just so you know. I just thought I’d share.]

Right now, Gilead is watching Toy Story for the 5th time since Tuesday and systematically destroying the living room. I haven’t showered since two days ago and the breakfast dishes aren’t yet washed. I’m going to have to get up in a minute to change the third poopy diaper of the day (poor guy has stomach flu, awesome.)…all to write this little blog post. It hardly seems worth it.

The other thing my blog entries usually are in my head is a response to whatever I’m reading or watching. Maybe that would be more fun for ya’ll. I almost posted this on FB last night. We have been listening to The Fellowship of the Ring – mostly me and FOR me, but I think Gilead likes it. He liked The Hobbit – and Little House in the Big Woods. Last night while I was doing dishes I got to my favorite part, perhaps, in the whole trilogy: the council of Elrond. If you haven’t read the books and are relying on the movies to inform your knowledge of this scene, go read the books! In either case, I’ll just post the quote and not try to summarize. It’s my favorite moment, ever.

“No one answered. The noon-bell rang. Still no one spoke. Frodo glanced at all the faces, but they were not turned to him. All the Council sat with downcast eyes, as if in deep thought. A great dread fell on him, as if he was awaiting the pronouncement of some doom that he had long foreseen and vainly hoped might after all never be spoken. An overwhelming longing to rest and remain at peace by Bilbo’s side in Rivendell filled all his heart. At last with an effort he spoke, and wondered to hear his own words, as if some other will was using his small voice.

There are parts of this story – and this is one – which never fail to bring tears to my eyes. They are heartening tears. Tears of courage. The older I get the more I see the joy in life is not the joy I had planned for myself. It doesn’t consist of the career I wanted or the house I thought I’d have or vacations taken or parts of the world seen. It helps that my choices right now are very limited and therefore black and white. I am JUST starting to settle into that and embrace it, which also means leaving behind some of those natural (and perfectly fine) longings because if I didn’t they would hinder me. I guess it’s a good thing I didn’t know when I started out on this journey that it wouldn’t look at all how I thought (I mean the journey of family and building a life with another person) and that the current hardships would be in place for what feels like such a long time. It’ll be at least 4 more years before we can go anywhere. We had another brief flirtation with living on my grandparents’ farm for the free rent (not to mention the glories of 16 acres!), but decided that Henry can’t quit his job to finish school faster and that keeps us here. Which also keeps us in this very nice two bedroom apartment. I’m so thankful that I’m thankful for it. I’m thankful for God’s faithfulness in opening my heart to Him this year. I have to say, the faith I had to offer Him was very small indeed. But in this year I have been able to see, more than ever, the people around me – so many families in our own parish – are struggling in the EXACT same ways.

Can I tell you something amazing? Henry’s grandpa is GIVING us his car. It’s 13 years old but has 40,000 some odd miles on it and because he is a Shuffle – THE Shuffle – it is impeccably maintained. We weren’t praying for a new car and the anxiety of our current car’s needing maintenance we won’t be able to afford was only in the back of our minds, but this was a small miracle. Another proof for our doubting hearts that He hears our prayers and answers them in concrete ways. He will take care of us in this apartment for however long we need to be here. And after that, when we have more choice, He will guide us to where we need to be.

I love this passage from The Fellowship… because it’s such a perfect picture of how life in Christ feels to me.

In the daily snippets from Little House that I hear, another longing is stirring in me once again – and hope that some of it can be realized no matter where I live, even if it’s here in a place with a small, shaded yard that we don’t own in the midst of the suburbs. Although he has long since forgotten about it, I often try to answer my friend Chris’s question about why pioneers were so endlessly fascinating to girls. For me the answer lies in my bone-deep satisfaction at just hearing about Ma making cheese [Or hats! From oat straw! For Pete’s sake!] and the sense of harmony in their lives and love in their home. In the most recent issue of Martha Stewart Living (don’t judge me for having a subscription. It was a gift. I actually don’t much like that magazine or her way of life despite having many similar interests to Martha. But that is another post for another time), there was a small article about a woman named Bea Johnson, who wrote about book – Zero Waste Home – about her decision to fundamentally change the way she lived when they downsized homes. Something about that – the clean aesthetic, the high function, extreme purging??? – appealed to me and I want to Spring clean like never before. As usual, I have a ton of thoughts about what I’d LIKE to do and haven’t gotten to any of it yet amidst the serious NEED FOR TIME AT THE PARK going on at our house, but as long as the sunshine holds, I’m being positive about it, instead of doomsday. I will do one small step at a time. I should read that book, too. It’s making me re-think all this packaged stuff I buy and wanting to make a lot of it for myself. Little House is making me realize that it all might be more work, but it’s still pretty simple to make things at home. And infinitely more…homey. Not just healthier, although that is a good reason, but somehow richer. Closer to God? I’m trying to put words to a gut-level feeling I have about it. Wouldn’t you rather roll on a deoderant made with love out of edible ingredients than something marketed to you by someone who doesn’t care about you that will give you cancer? Speaking of home-made deoderant: I sure hope it works. The natural Tom’s sure doesn’t and I STINK lately.

Okay, so we’re also deep into the 5th season (I think) of Mad Men and loving it. Can I just say…I’m so late to this particular (what’s the expression? hoe down?) that it’s pretty irrelevant, but the first episode of season 4 – with all the mid-century decor. Stunning. A visual feast! I was practically salivating. And I’m reading the Wheel of Time series, by Robert Jordan. It’s a good read! And totally safe to own for when we have kids of reading age. Despite the horrible cover art, the stories are really good (if you like fantasy) and very clean. In a refreshing twist, most of the main characters so far equate sex with marriage as a worldview. So even though there is romance, it feels noble.

Other than that, I’m contemplating painting our kitchen cabinets, planting some kind of small garden in our yard or herb planters from our kitchen window, making baby hats and creating a more permanent craft space IN OUR HOME for myself. Our space DOES work well – in the words of my friend Emily who was over the other day with her 5 children and unless I was mistaken seemed hilariously envious [ I told her I’d love a 3rd floor play room and she said, yes, but then there’s SO MUCH JUNK. I see her point] – but I need a place to work here, in our house. Especially since we’re going to be here for awhile. I just thought of this: I guess I should just pray for a craft table that will fit, since God seems to be giving me stuff un-looked-for. 🙂

One thought on “Just being chatty”