I wish I’d had Emily there to photograph our tiny little apartment as I got ready to say goodbye. Instead, I had our little Canon pocket camera, which has come in very handy since we bought it for our honeymoon but which doesn’t often make things prettier than they really are – which is the epitome of Emily’s photography.

I literally began tearing things off the wall after I took these pictures and I just knew I’d be sad if I didn’t document the hard work I’d put into our tiny space our first year. It went through several incarnations. This was the latest: maybe you can tell we were busting at the seams. It wasn’t helped by the fact that I over-decorated at the beginning and never got up the energy to take things down and fill in the nail holes. 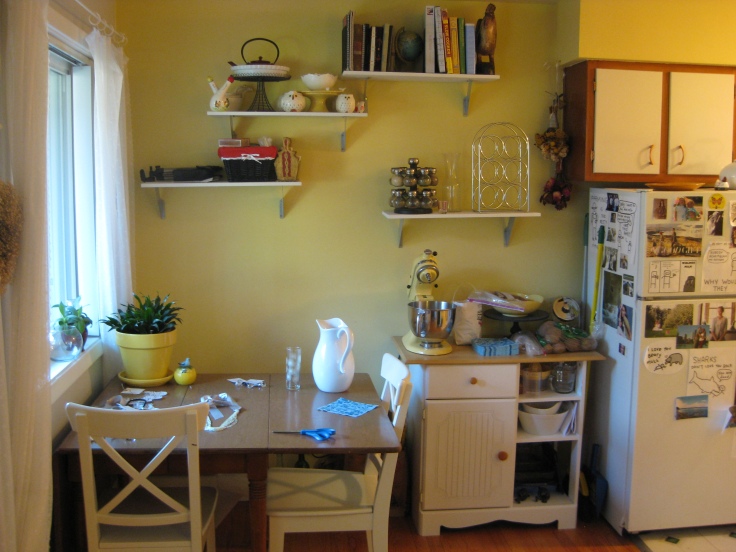 Coming straight off of our wedding, I was still enamored with butter yellow. Not only did I paint the kitchen this color, I registered for yellow pottery and a yellow kitchen aid mixer. I’m not sorry…I don’t think…but this will be the last time I convince myself I will never fall out of love with a color.

Funny story: my friend John Campbell is a comic artist who returned to Chicago last year after living in Mexico for a year. Meanwhile, another friend of mine sent a mass email to some friends acquainting us with the Canadian comic artist Kate Beaton. I particularly enjoyed comics like this one and so I printed a bunch of them out and put them on our fridge – which you can see in this picture. I got in touch with John one day because I was missing him and asked him what was new in his life. To this he replied, “I’m dating a Canadian comic artist named Kate Beaton.” I was like, “you are kidding me. No, really. I have her comics all over my fridge.”

*Note* Don’t buy a huge plant from Ikea unless you have measured your space and you know exactly where it’s going to fit. Also…remember that plants grow! You’ll see this plant later, but for a long time it was the jungle through which our guests had to fight their way in order to come into our house. Plus it was under the birds collecting seed hulls and sometimes poop all day long. Speaking of the birds: they have moved into their new penthouse suite and Oh! the Developments. I’ll have to save it for a later post.

You can see our corresponding Muppets that I got from Henry on my 25th birthday. He’s Kermit and I’m Janice, although now that I know him better I think he’s more like Animal. I have always been Miss Piggy; I just didn’t want to admit it.  That owl we bought in the native village on the Panamanian island where we honeymooned. Have you ever been in the jungle, anyone? It’s a very lively place. And by that I mean gross.

This is our (somewhat) serene bedroom and wall of awesomeness.  You can see our poor plant desperately in need of water. Don’t worry, we don’t usually let him get that deprived.

But this reminds me of the story I want to tell. This happened the week before we moved. I was sitting in the living room at my table after having taken a shower and Henry was sitting the recliner which we’d moved to our bedroom at the foot of our bed. In this position, we could easily hear but not see each other. I’d left the little window in the shower and the bathroom door open to air it out as it was still very warm out.

From what I thought was the bedroom I heard a man’s voice yelling. I didn’t think much of it (Henry has a booming voice and often yells when he is stretching or doing almost anything, really.) until Henry exclaimed (rather angrily) “What the F***?!” I got up slowly and went into the bedroom asking what was up, thinking he was simply frustrated he’d fallen asleep while he was supposed to be working (he takes frequent, sometimes inadvertent, naps). He asked, “didn’t you hear that noise?” I was like, “that wasn’t YOU?! Are you sure? It sounded like it came from in here.” I started to insist he’d woken himself up with a yell when he said “NO. It was coming from where you were sitting!”

Then I started getting that creeping feeling up the back of my neck. You know: when you realize you ought to have been freaked out but weren’t. Just as I was starting to shake, yes shake, we heard it again: a loud and wordless cry in a man’s voice. I kid you not, to me it sounded sinister. And it did indeed sound as though it came from our living room. I was halfway convinced someone had been in the room with me that whole time.

I scrambled to the head of the bed and put a pillow in front of me (for safety?) and Henry dove under his side of the bed for – get this – his GUN. He had his 22 caliber rifle that he got for his birthday under his side of the bed (not loaded, trigger locked). Boy…he got that gun loaded quickly. He then tiptoed to the open door of our bedroom – as though trying to sneak up on an intruder – and I got down on the floor between my side of the bed and the closet in case someone was about to throw something in through our window. Because it was probably the apocalypse.

When Henry DIDN’T find someone in our living room, he realized it must have come from the open bathroom window (we lived on the ground floor). I think the college punks must have gotten a glimpse of him ripping open the shower curtain with his rifle barrel because they jumped straight into their silver SUV and took off.

We did eventually laugh at ourselves, which I hope you are doing right now. I will never forget the image of him stalking through our apartment with his rifle while I cowered behind the bed. And for the record, Henry informed me that he would have shot the intruder had there been one. Apparently it’s legal?…Now doesn’t that make you feel better?

3 thoughts on “Out with the old”