I am a new admirer of Dooce.com. I just found out what that was from Sam Campen and within the first 48 hours I was hooked. I read back through some of the archives about her bouts with depression and I looked through her style entries going back probably two years. Yes, I do sometimes have that much time on my hands. Also it was for business, so don’t worry. Who doesn’t accidentally spend a few hours online? Anyway, my point is that Heather (of Dooce.com) is hilarious. She’s an excellent writer and her devil-may-care attitude is refreshing sometimes. The way she is first and foremostly self-deprecating reminds me of Anne Lamott. It’s something I’ve always wanted to work on: seeing my own foibles and being able to laugh at them.

Anyway, I didn’t start this blog with the purpose of sharing intimate details of my life. Chances are, a lot of you reading this would know most of them anyway. 🙂 But today I wanted to start off by writing about how I’m reading “Nourishing Traditions” because it’s occupying a lot of my thoughts right now. The tagline is “The cookbook that challenges politically correct nutrition and the diet dictocrats.” If that doesn’t give you a clue as to what it might say, hang on. 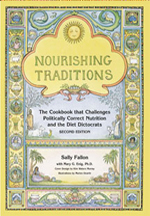 First of all, the family in which I grew up went through several phases of health food craziness with my mom leading the charge. I don’t know when it started, but she’s deeply distrustful of the medical establishment. I, of course, have imbibed this view from her over the years – although it has been diffused somewhat through knowing people in the medical world and Henry just having had sinus surgery. Thank you again, Dr. Reddy. But when I hear things like this http://www.bbc.co.uk/iplayer/episode/p003r6jk/Newshour_30_07_2009/

interview (toward the end of the hour – about min. 49), I do get ticked off. Who is funding these broadcasts making it so important to reiterate how commercially produced food is just as good for you as organic? In the forward of Nourshing Traditions – which is primarily a cookbook – Sally Fallon, its writer, sites scientific study after study disproving much of the diet “sense” we hear from most mainstream sources. Not only that, but showing what our processed diet is doing to us beyond making us overweight. It’s truly frightening.

So, I’m contemplating this for the second time. When Henry and I were dating we decided to give (more exclusively) organic a whirl, following something like The Maker’s Diet. That was the most stressful thing ever. Not necessarily because of making the food, but because neither of us had our own spaces in which to cook and it was insane trying to find time to squeeze in kitchens already being used by two or three people. I said back then that we should try it if and when we got married. Here we are now, married, a little overweight and Henry not feeling any less fatigued than he did before his surgery and I’m willing to maybe try it again.

I am addicted to white sugar and flower. It’s horrible. I can’t go a week on a caveman diet without wanting to promise my firstborn child for a slice of pizza. Here’s maybe a detail you don’t want to know, but we’re also doing nfp (natural family planning) and my cycles have been so weird. They started getting really messed up right around Easter when for the year I’d been tracking they’d been like clockwork. Last month I didn’t even ovulate. We are not trying to get pregnant right now and it’s making it that much more stressful not knowing when I might suddenly be fertile.  I think back to what I was eating back around Easter when this all started – we were on weight watchers – and I wonder if that started it. For the first time in my life I was eating very little fat and almost no saturated fat at all. (By the way, if you read any part of NT, read the part on fats – it will blow your mind) Anyway, my whole point in this is that I’ve always hoped I could bring a child into this world not addicted to sweets and teach her how to eat more healthily than I do. The more I read, the more I am starting to realize this process has to start now, before I am even close to conceiving (well, you know, intentionally). I have to start eating this way and learning to cook this way myself BEFORE I have a child. And, unfortunately, I will probably be our family’s defense against bad food. Henry will cook if I ask him, but he’s got relatively few things in his repertoire. He certainly won’t be baking bread every week unless and until I make a huge change and then really beg him to take on one of the cooking jobs. 🙂 I love you honey!

Also, as I said, he has chronic fatigue issues and while the sinus surgery was very needed and has made a bit of a difference, it wasn’t the miracle cure. Not that I am pointing to a whole organic foods diet as the miracle cure either, but I feel like we have to try.

So, one of my goals for today is to call this family farms’ cooperative in Michigan that we almost tried last time and at least get some raw milk, butter, cheese and pastured eggs into our frig.

One thought on “important things”