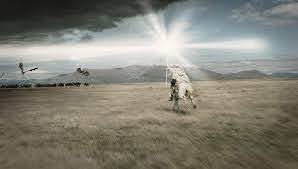 I’ve seen in several places recently, a false and damaging idea repeated about what courage is and how it works. It goes something like this: there is some man or woman out in the world who, being placed in a sphere of influence or at an intersection with a group of people who disagree with him, holds an unpopular opinion and refuses to back down. The commentator upon this scene gives the opinion that this person ought to have shown courage by capitulating to the group, or that the group in fact showed courage by standing up for what’s right. Inevitably, the situation ends with nothing going the dissenter’s way. He has stood for what he believes to be true to no avail. In the opinion of the observer, truth and righteousness have prevailed and the dissenter deserves to be cast by the wayside, along with his unfortunate opinions. The courageous mob lives to fight the next battle.

If I had only encountered this idea in one place, I would have laughed it off, but I’ve seen it over and over in the last several months: this legend of the “courage” it takes to be on the winning side. It’s always about some current cultural battle: arguments over gay rights or white privilege, for example. Never mind how laughable it is that a pro gay rights or anti-racist agenda could conceivably be considered the underdog position in this country, just leave aside what the scene is about and focus on who is doing what in which place. Can you honestly tell me that one man, standing alone against a mob is exhibiting cowardice? Or that a mob, speaking the widely accepted cultural narrative for which they will receive no blowback whatsoever, is exhibiting courage?

No, friend. Disagree with the man if you will, but he is no coward. It takes a lot of courage to do what he did.

I was reminded of this the other day when this quote about Saruman came on as we were listening to the Two Towers:

“anyway I think he has not much grit, not much plain courage alone in a tight place without a lot of slaves and machines and things, if you know what I mean.”

The hobbits are comparing Saruman and Gandalf, both wizards. Saruman has just lost his bid to try to capture the ring by sending a band of his orcs to kidnap two hobbits (whom he hopes are the hobbits with the ring, but alas, are not) and attacking the stronghold of Rohan with his enormous orc army. While Gandalf, after being sent back from the dead after his battle with the balrog under Moria, rides alone back and forth across the plains of Rohan to muster aid to Theoden, king of Rohan.

C.S. Lewis says this about courage in the Screwtape Letters:

“Courage is not simply one of the virtues but the form of every virtue at the testing point, which means at the point of highest reality. ”

I’ve been thinking about this idea as I’ve been thinking about courage lately; that courage is “the form of every virtue.” In this climate, it takes courage to be truthful about what you believe, if those beliefs in any way deviate from what is currently acceptable. Why does it take courage? Because right now, if you disagree with the racial narrative, for instance, you see the violence being done to others who have disagreed. You are seeing people get attacked online, and be alienated from their friends and family members. You’ve probably heard about people losing their jobs or being forced into racial sensitivity training at their place of work. If you disagree, you are probably scared. Telling the truth about what you believe, even if it’s counter-cultural, has real-world consequences. Just ask Bret Weinstein.

Another example, nearer to my heart at the moment, is how much courage it takes sometimes to hope. We arrived in Birmingham on Thursday afternoon to the news that our dear friend Chris Scherf got a diagnosis for the cancer that has ravaged his body in a shockingly short period of time. He’s had it for a long time, according to his doctors, but it only took weeks for it to start shutting down his organs after he found out about it. Once it was advanced enough to cause pain, it was too advanced to cure.

With the diagnosis came a great sense of hope; a crushing, unbearable hope. In fact, earlier in the day, word had come from MD Anderson hospital in Houston that they had looked at Chris’s sample and couldn’t make a diagnosis. They were basically giving up. They had a few more stains to look at but didn’t expect it to reveal anything new. The choice had been between a catch-all chemo or hospice.

A few hours later, Chris’s oncologist came rushing into his room and almost shouted the news: Follicular Dendritic Cell Sarcoma. And they had the chemo drugs to administer the next day.

No one knows what will happen to Chris’s body on chemo. He’s weakened, frail, in pain all the time. It’s hard for him to eat. It’s easy to look at that and tell yourself it won’t work. It’s easier in this moment to abandon hope for his recovery because when you hope, you allow yourself to think about the good things he might have again and the good things he might be for the people who have depended on him. I hardly need to elucidate those for you. He’s young, he has a beautiful wife and four small children. He’s beloved by many, and wise, and gentle, and selfless. We want him to live. We petition God for his life from moment to moment.

It makes the grief that much harder to bear if hope gets taken away. It’s easier not to hope. It takes courage to look that hope in the face, and to bear the potential pain of it. It takes courage to be more human rather than less – to look loss in the face and own your intentions, your mistakes, your bad feelings, and the truth of things – and hope for good anyway.

What Christians are doing is looking not only at this life, but beyond it. We believe that death has already been defeated. Did you know that in the account of the death and resurrection of Jesus Christ, it says that people rose from the dead after Christ’s resurrection? I love that image. Some true thing was happening that couldn’t be contained, though it’s meant to come in its fullness later, after time. Life was bursting out from his resurrected body and it would not be denied. A higher reality than what we can see was showing through the cracks of this dark world.

I love Tolkien’s stories because they are full of people who have courage. Sometimes all it takes is for one man to stand against whatever is coming, knowing it could mean destruction, to give everyone around him the courage to keep going. I’m not saying Christ was doing something metaphorical. I believe He is God, and that He is alive. I believe He was ushering a higher reality into the darkness of our present world. But whatever else it was, his death took courage and all courageous deeds mirror and complete His.

Our dear friends are exhibiting great courage right now. They are staring suffering and death in the face and believing it will not end them. In fact, they are – like my favorite Tolkien characters – unchanged in their personalities, humility and humor as they endure this suffering and fear. I don’t want to suffer, but when I do, I hope to face it like this.

One thought on “Courage”