This time it took us about 8 weeks to come up with a “creature name” for our newest member. If you remember, Wyatt is more commonly called “Sproot” and for a very long time Gilead’s only named name was “Piggle”. Henry has a obsession with words and how they sound, so what was once an accident or a passtime has become an object of real consternation: finding a “creature name.”

{Here she is a coule of weeks ago. I just can’t get over how beautiful she is!} 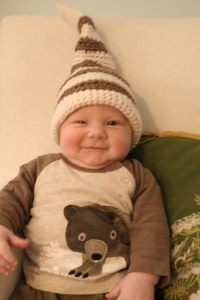 {Here are the boys at roughly the same age, for comparison. She looks like a Shuffle, doesn’t she?}

We started calling her “Gwil” – or something like that – in imitation of Wyatt who has to be schooled in proper pronouns every time he refers to her. (My favorite was Wyatt, during a diaper-change he was observing, remarking to Henry: “He has a seashell. He has a seashell on his penis.” We are not used to girls around here. So we tell him, “she’s a girl” and he says, “Oh. She’s a gwil.”) But we couldn’t think of something unique that would stick though we were trying every day for weeks. Eventually, Henry said it to me and I laughed and it stuck. Our daughter’s nickname is Gwillis. I call her Gwillies.

She is actually named after some righteous women, though. In both senses of the word. Virginia was Henry’s Grandma Shuffle’s middle name. He never met her. She died of lung cancer the year before he was born. His grandfather – with whom he had a special relationship and who died two years ago at the age of 103 – called her “Jin” or “Jinny.” The first Thanksgiving I spent at his house when we were dating, he handed me a wedding picture of theirs straight out of the photo album because I said I wanted to copy one. The man was known for being hospitable and generous, but what I hear of Jinny from Henry’s dad and uncles was that she was home. It’s something I feel passionate about because I think it’s disappearing. In fact, all of my children have names that reflect our feelings about home and that will hopefully remind us, and them, to be brave. All three of her names are reminders to us of real, and fictional, brave women: Ginny (Harry Potter. Because it wouldn’t be a Shuffle name if it wasn’t somehow derived from nerdy literature), Eowyn (Tolkien) and Louise, which means warrior. Funnily enough, there are two family names we’ve used that have stood for multiple grandparents. Wyatt’s “Robert” is after both of my grandfathers. Louise was both my Grandma Swank’s and Henry’s Grandma Zaffke’s middle names. I eulogized (is that a word?) at my Grandma’s funeral that she was a mighty woman. She did everything. And she taught me to sew. I miss her all the time. I wish she’d been able to meet this one.