Can I just complain a little bit to you? You won’t mind, right?

Right now I am sitting in front of the computer drinking my Dunkin’ Donuts coffee – WITH SUGAR – after having run to use our free Chick-fil-a coupons for breakfast because it was just one of those mornings. Gilead slept like a total champ until 3:30 a.m. and then he just decided to quit. I neglected to pump after missing a feeding last night because we were out on our 3rd first date (more on that later – this time, meaning first date after baby) and he got a bottle of breastmilk from Auntie Jojo. So I woke up so engorged he could barely latch on and then got basically drenched and didn’t end up drinking much after all. So there’s me at 3:30 sitting at the kitchen table pumping. I pumped 8 oz folks! 8 oz. of liquid from my breasts. Let’s just ponder that for a minute. Ouch. Then when I finally got back into bed he started moving around and grunting and when he wasn’t doing that, Henry’s stupid sleep apnea mask kept making noise and I kept having to ask him to turn over until finally Gilead wouldn’t sleep at all. I don’t know how much sleep Henry got after 3:30, but I got none. THEN, when we finally got up around 6:30, the dog started barking at one of our neighbors knocking at our door – at 6:30. I felt bad because he might have needed something desperately but we were both basically naked and Henry was rushing out the door. That set Griffy up to start barking at every sound out in the hallway. Gilead had a major blowout after that. So bad that we had to take a shower. The poor dog god shut in his cage again for barking and I feel terrible for telling him, as he was hesitating, to “go!” which to him only sounds like “no!” and so he was totally confused and shaking, trying to do what I told him. This, after an entire week of getting nothing done all day because G won’t stay asleep on the bed or eat enough at one sitting to feel happy or be happy in his mei tai or his bouncy seat with me RIGHT THERE bouncing it with my foot. I am attached, PERMANENTLY, to my baby!!!!!!!!!!!!!!!!!!!!!!!!!!!!!!!!!!

But really, he’s very cute. I can’t complain too much. And the other night I called Henry crying that I needed a break so he took care of him all evening while I got to sew and watch HGTV on Hulu. It was exactly what I needed. And, I have to admit, it was a little fulfilling to watch Henry do all the stuff I do with Gilead and see how hard it is. He took him to Target and endured the screaming in the car  and probably some in the store; he had to deal with the dog following him around and wanting attention and then barking at the exact moment that he couldn’t do anything about it because when he put the baby down to do some doggie discipline, the baby would scream. He got to see how hard  it is just to feed yourself or use the bathroom when Gilead can’t stand being put down. In other words, what I do ALL DAY, EVERY DAY.

Oh my gosh…I know I’m going to sound redundant when all the moms I’m friends with who post their struggles (sometimes) on facebook say it too, but I’m the WORST MOM EVER. I know it’s not really true – although I thought it was funny today that someone’s comment on one of my friends’ posts was about how we all want to hurt our children sometimes and it’s totally normal when no one on the thread even said anything about hurting anyone, just that at least giving a toddler a treat for doing something good was better than cussing or slapping – but oh my gosh. I was mean to everyone BUT Gilead this morning AND I ate sugar and food that’s not food. I drove 10 minutes away to go GET food that’s not food. It was comforting food-like substance. AND I brought some to Henry. I don’t know if that constitutes me being a good wife or a bad wife or a little of both. I’ll tell you…I think moms need to stop saying they’re bad all over facebook and just know they are doing some of the most important, thankless work on the planet. However, if we didn’t complain we might not hear how well we’re actually doing. So keep complaining moms. I’m right there with you. I’ll tell you you’re doing a good job.

Taryn, TOTALLY give Juni an animal cracker if she climbs the stairs. That is not bad parenting. And if you want my 2 cents, which you probably don’t and I don’t mind a bit, don’t bother trying to explain your predicament to your 2 1/2 year old, just give her the cookie. Let’s be honest: as wonderful as our husbands are – AND THEY ARE! – it’s hard enough to get THEM to empathize. I think they’re all saying to themselves, “whew! I’m glad that’s not me.” Secretly, of course. They’d never admit it. Your kids aren’t EVER going to know – or try to care – how hard it is until they do it themselves.

I feel better. I don’t know if it’s the blogging or the coffee or the fact that Gilead has been sleeping now for almost an hour since eating but I’m just gonna roll with it.

Last night we had our 3rd first date. Our first first date – we went over them over dinner after spending the requisite amount of time talking about our child (from whom we were having the date to escape – a fact which Henry gleefully pointed out as the moment he has been waiting for for years) – was in September of ’06 at Thipi Thai in Glen Ellyn. I remembered being skeptical that he was going to end up being a  judgmental a-hole because he talked about “discipling” his younger sister (by which I know now he just meant giving her occaissional big-brother type advice) and cited the example of convincing some friends to do “more natural childbirth” when speaking about his passion for making a difference in people’s lives. Internally, I was like “it is none of your business how your friends’ wives decide to give birth…a-hole.” Come to find out, he convinced them not to circumcise their sons – a WHOLE other type of post.

Our second first date was at Ravinia – after he’d broken up with me for a month and then realized through a series of conversations via email and one epic moment of reconciliation (think him calling me in a panic [crying on the voice message and telling me he just needs me to know that he loves me] from Seattle twice in a row after receiving my email saying I knew it was over for good and just didn’t want to hear it and then me getting those voice-mails in the car on the way to Indiana after having sent that email and feeling pretty at peace about it for the first time) – on the lawn with mojitos, Nicklecreek and Fiona Apple. Also epic. We were walking to find ice cream when he held out his arm for me to take. I thought it was lame so I told him no, but he could hold my hand. “Really?!” I remember thinking, as I came out of the bathroom, “I feel hot (!) and I’m with the most loving man I’ve ever met. I’m pretty lucky.” LOL.

So, our third first date was, on immediate review, also pretty great. We went to OUR favorite Indian restaurant here: Viceroy of India (suck it, India Palace snobs) and I got pretty giggly on two gin and tonics. We played rummy. We talked about our dates (also, our second date is a pretty good memory: a walk to the big boulder at Morton Arboretum in the rain, lots of almost-hand-holding-sexual tension…all that) and our son (the way his whole body gets red and he moves his little arms and head like a baby bird when he gets upset – it’s hilarious). I knew I was tipsy when I was laughing at him singing opera-style with Pink in the car on the way home: “Raise your glass…!” who, by the way, reminds me so much of Kara Thrace. Especially singing that song which is a very Starbuck-y kind of song. Am I right all you geeks? 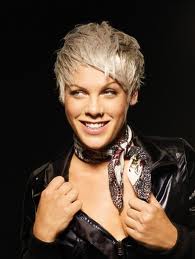 So…I found out after doing that search that 1) apparently everyone wants to be Starbuck and 2) Pink is super dirty. The end.

3 thoughts on “To Gripe”